God of healing or protector of thieves

God of healing or protector of thieves

One of the most recognised symbols around the world representing Emergency Medical Services is the Star of Life.

The blue “Star of Life” was designed for the US National Highway Traffic Safety Administration (NHTSA) in response to the need for a uniform symbol representing the emergency medical services system. The six barred cross was adapted from the personal Medical Identification Symbol of the American Medical Association and contains the Rod of Asclepius.

The NHTSA holds priority rights to the use of this registered certification mark.

The serpent and staff in the symbol (Rod of Asclepius) portray the staff of Asclepius, an ancient Greek physician deified as the god of medicine.

Overall, the staff represents medicine and healing, with the skin-shedding serpent being indicative of renewal.

Back in the day around 1400 BC, Moses used the bronze serpent erected on the pole to cure the people who were bitten by snakes.

The other main reason why the serpent has been used is the shedding of the skin which indicated longevity and immortality. The snake’s ability to change from a lethargic stage to one of rapid activity symbolised the power to convalesce from an illness.

Charas and Martyn (1673) subjected the viper to innumerable experimental investigations and concluded they were valuable remedies for itch, erysipelas, measles, smallpox, leprosy and were a valuable adjunct to the production of beautiful skin. Hence, the snake has been a powerful symbol of healing itself.

The snake’s ability to shed skin represents immortal life, the sudden change in activity emphasising transit from sickness to cure, and most important of all it was used by Asclepius who is the god of healing. 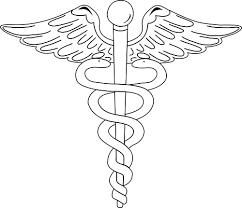 The Caduceus is the staff carried by Hermes in Greek mythology and consequently by Hermes Trismegistus in Greco-Egyptian mythology. It is a short staff entwined by two serpents, sometimes surmounted by wings.

The symbol originated when Mercury once attempted to stop a fight between two snakes by throwing his rod at them, whereupon they twined themselves around the rod, and the symbol was born.

The caduceus symbol, however, is identified with thieves, merchants, and messengers, and Mercury is said to be a patron of thieves and outlaws, not a desirable protector of physicians.

In the words of Stuart L. Tyson

As god of the high-road and the market-place Hermes was perhaps above all else the patron of commerce and the fat purse: as a corollary, he was the special protector of the traveling salesman. As spokesman for the gods, he not only brought peace on earth (occasionally even the peace of death), but his silver-tongued eloquence could always make the worse appear the better cause. From this latter point of view, would not his symbol be suitable for certain Congressmen, all medical quacks, book agents and purveyors of vacuum cleaners, rather than for the straight-thinking, straight-speaking therapeutist? As conductor of the dead to their subterranean abode, his emblem would seem more appropriate on a hearse than on a physician’s car.

GOD OF HEALING OR PROTECTOR OF THIEVES

With so many medical logos representing companies providing medical or emergency services, it is time to take a closer look – are they proudly displaying the God of Healing or the less desirable patron of thieves and outlaws.