When It Bleeds Through Just Add on More Dressings!

Home » Blog-Old » General » When It Bleeds Through Just Add on More Dressings!
Next

When It Bleeds Through Just Add on More Dressings!

The myth explained: Every major first aid resource says to apply a dressing on any uncontrolled haemorrhage, and if it soaks with blood to add more dressings on top of the original but not remove the blood-soaked dressing. The claim is the removal of the original dressing may disrupt clots that are forming, causing the patient to continue to bleed.

Never Remove a Dressing from a Bleeding Wound; When It Bleeds Through Just Add on More Dressings!

To start addressing this myth it’s important to understand the basics of hemostasis, the process through which clots form. When an injury to a blood vessel occurs, collagen and von Willebrand factors (vWF) are exposed and promote platelets to attach to the wounded surface. As platelet aggregation occurs, a plug develops which stops the bleeding. Platelet aggregation occurs along with human tissue. Once a platelet plug occurs and haemorrhage stops, a fibrin mesh begins to form that stabilises the clot and strengthens it.

There is not one clinical trial that demonstrates removing a blood-soaked dressing will cause clot removal or cause the clotting process to start over.

When large bulky dressings are applied over haemorrhage sites it becomes very difficult to apply well-aimed direct pressure into the wound and as a result, more generalised pressure around the injury occurs. At this point, the dressing becomes a source for collecting the lost blood and is actually doing very little to control haemorrhage.

Dressings that quickly become saturated with blood are an indication adequate pressure has not been applied to the bleeding site. Simply adding more dressings on top of the injury will do little more than absorb more blood; it will not help control bleeding or support clot formation.

When a dressing becomes soaked with blood, remove it and apply better-aimed pressure with a clean dressing.

Where the bleeding point is identified, the rescuer, a bystander or the victim themselves should control
bleeding by:

The current ANZCOR Guideline 9.1.1 for major bleeding control is: 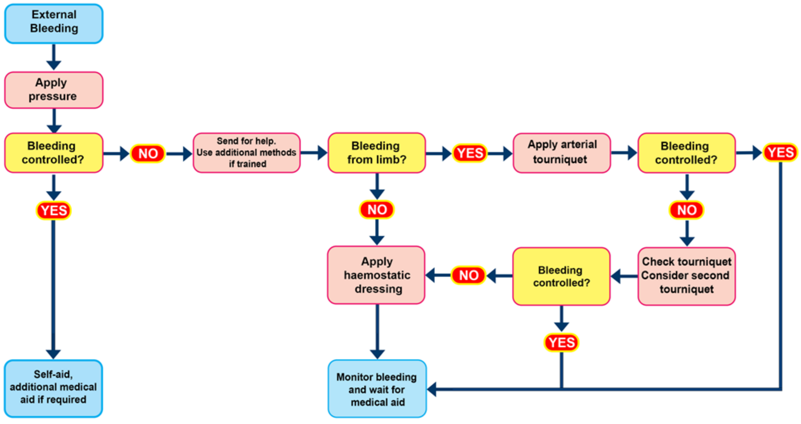 The application of an arterial tourniquet and/or Haemostatic dressing requires the provider to be trained in its use.

For the leading STOP the BLEED workshop in Australia;

In 2014, the American College of Surgeons released a position paper on prehospital haemorrhage management strategies. In this paper, they identify that well-aimed direct pressure is likely to control haemorrhage in most instances. When haemorrhage cannot be controlled with well-aimed direct pressure, they recommend the next step be tourniquet placement for extremity injuries. In instances when a tourniquet cannot be applied they recommend a haemostatic agent be added to a pressure dressing. Haemostatic dressings must be applied directly to the source of the bleeding in order to work.[1]

*** Part of this article has been reproduced with approval from EMS World (thank you).
Kevin T. Collopy – Sean M. Kivlehan – Scott R. Snyder